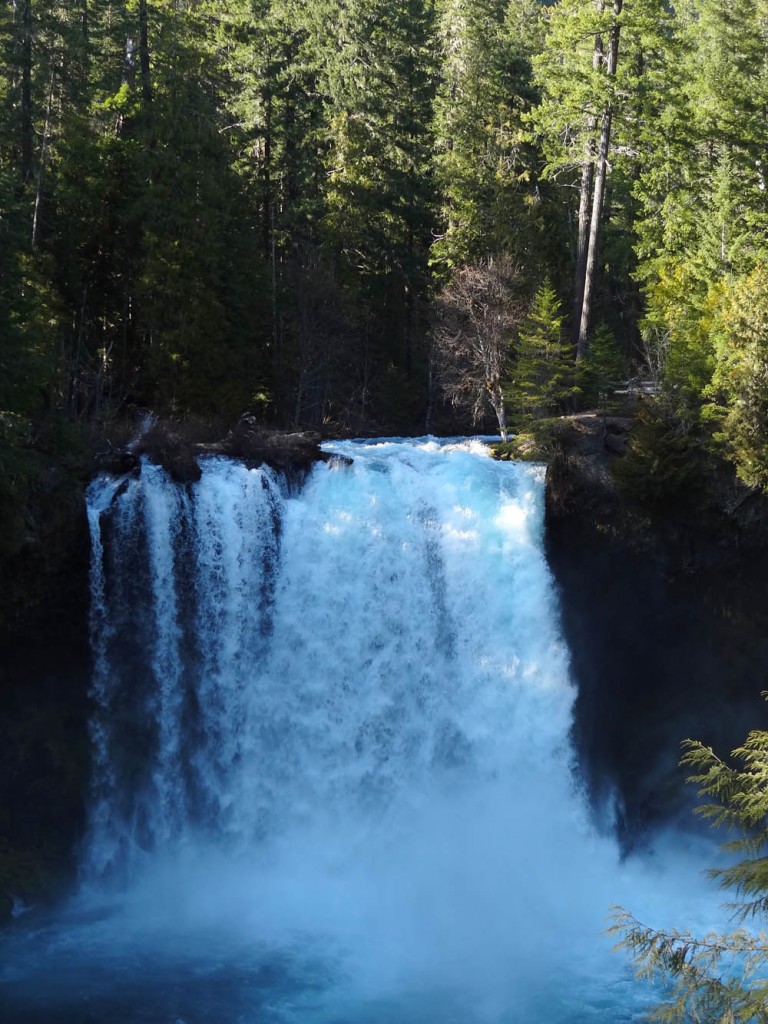 Koosah Falls on the McKenzie River

The McKenzie River Trail is a super popular trail in the Cascade Range. It’s one that I’ve always skipped because I love alpine hiking. After a recommendation from one of my coworkers I figured it was about time to give it a shot, especially with all of the higher hikes still covered in snow.

Distance: ~26 miles one way from end to end; we did a 12 mile loop taking in Koosah Falls, Sahalie Falls, and Clear Lake.

Difficulty: easy to moderate (moderate only due to distance)

Cons: BUSY!!!! We were up there on a Sunday, once we were away from the falls it wasn’t quite as bad

Dog friendly: So-So, On weekdays it would be fine, but there were loads of people on the Waterfalls Trail, not as much fun for the dogs, but Clear Lake had great swimming for them. Part of the trail crosses lava rock on a paved path with no shade, might be too hot for their paws on a really hot day. 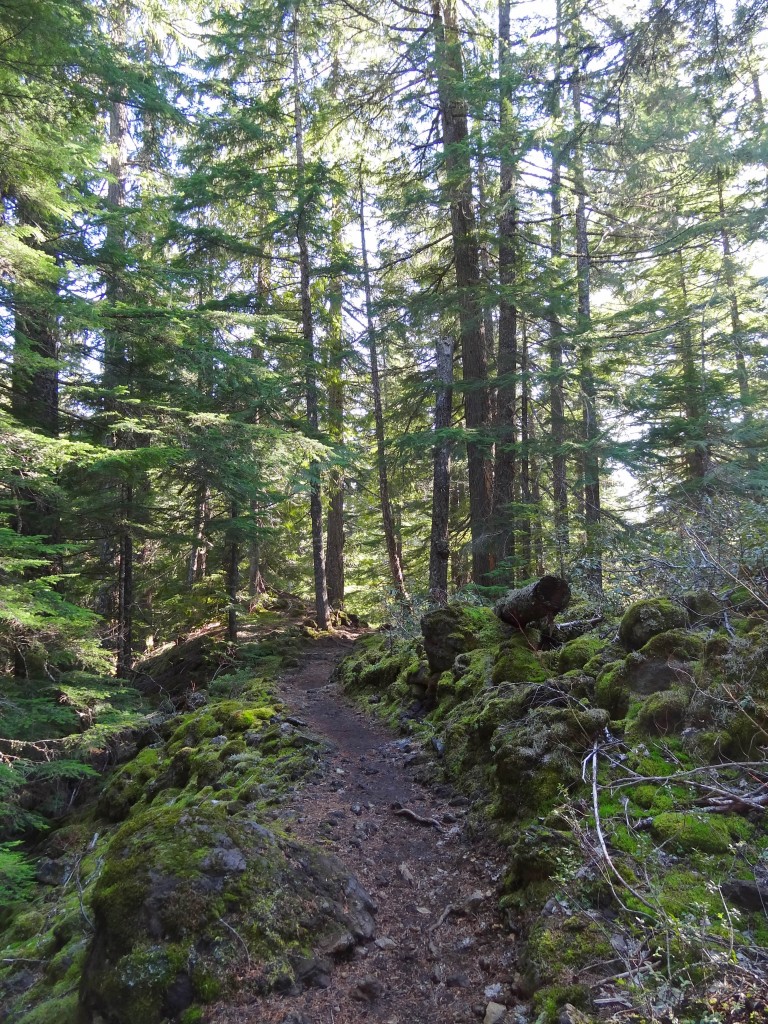 View of the McKenzie River Trail…you can see it’s not that strenuous…. unless you’re on a mountain bike.

We started our hike at the Koosah Waterfall parking area off of Hwy. 126/McKenzie Hwy. The well maintained trail winds down to a couple of different viewpoints for Koosah Falls, where you will find loads of people snapping pics, it’s easy to understand why, Koosah Falls is stunning. From there we headed up toward Sahalie Falls, less than a mile away. Both of the waterfalls were gushing, yay springtime, and the McKenzie River is so clear, it is magical. 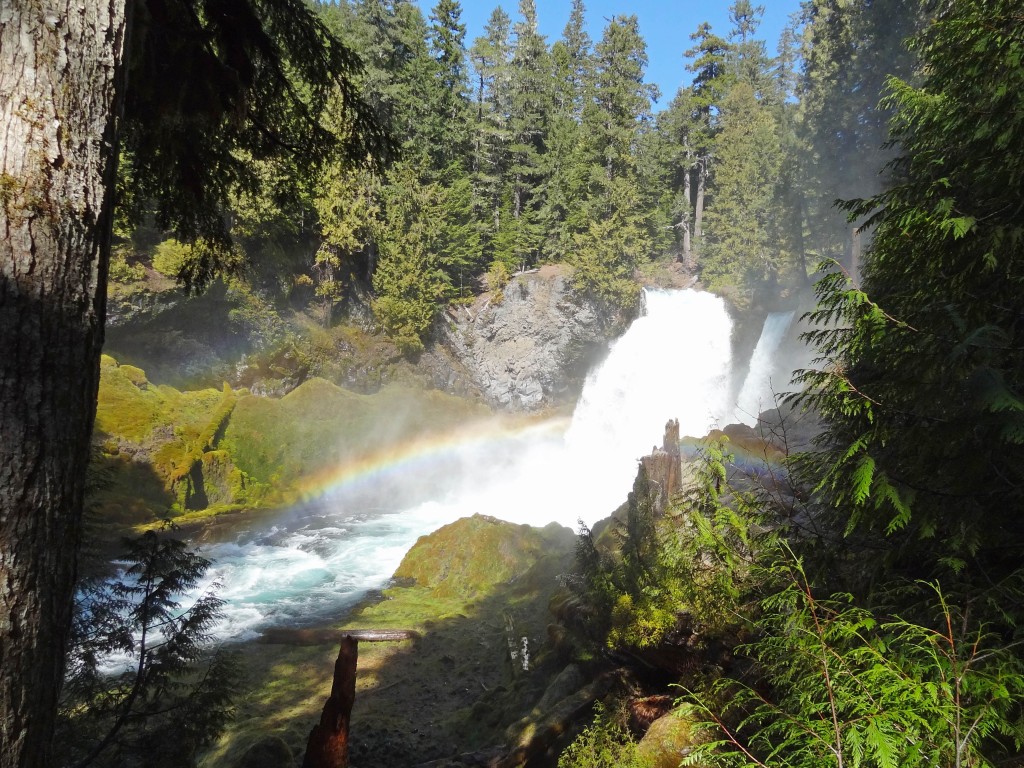 From the waterfalls the trail follows along the McKenzie river a bit further and then crosses highway 126 for Clear Lake, which is supposed to have the best diving in Oregon. There is a forest, that has been preserved by the cold waters, and you can dive through it/around it. The water in Clear Lake really was crystal clear and it looked deceptively like Caribbean water. So no misnomer here.

Our first glimpse of Clear Lake

saved me). There were a handful of boats out on Clear Lake, just people out fishing, paddling around and enjoying the beautiful weather. I couldn’t help, but think how awesome it would be to take a standup paddleboard out on the lake. This summer for sure! 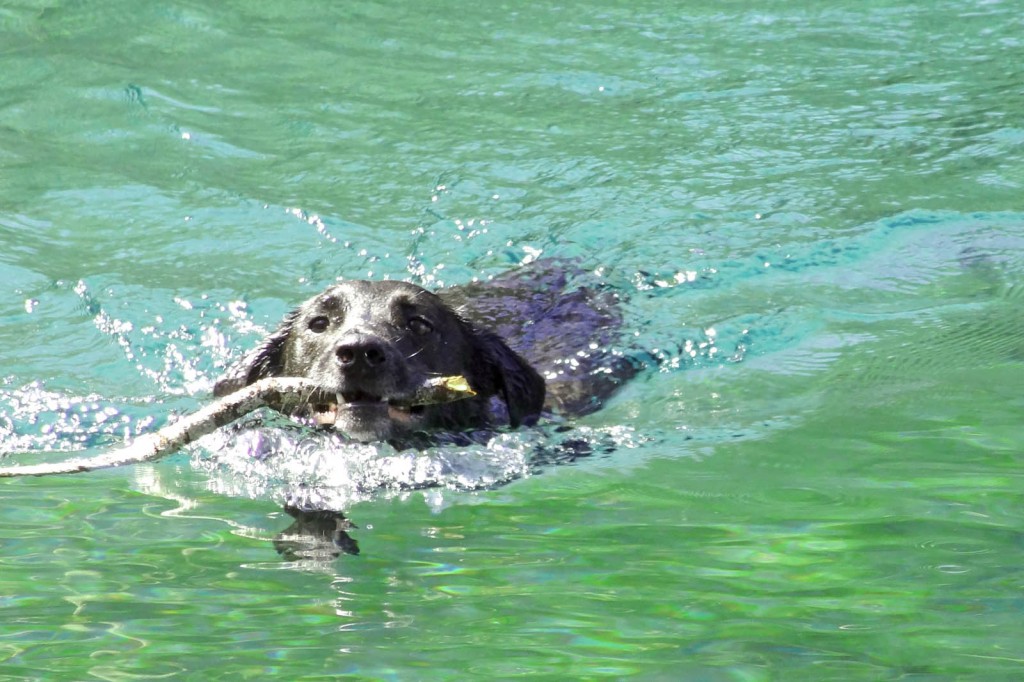 We followed the trail around to the opposite side of Clear Lake, where we found a beautiful pool where water enters the lake through the lava rock. Amazing. I love nature. It’s so beautiful and I love how accessible it is in Oregon. We knew that we wanted to hike atleast 10 miles, but were up for more, so we just followed the trail passed the lake. It eventually crossed another road, followed the river for a bit more, and ended at the trailhead. 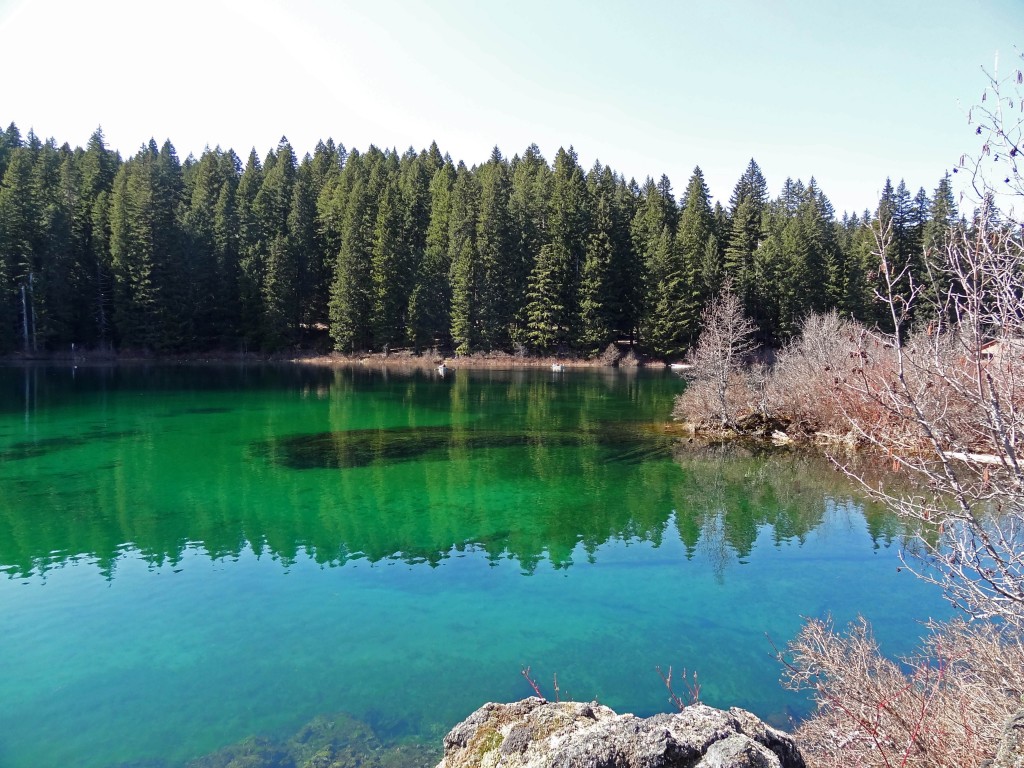 A little further around the lake….you can really see how clear the water is!!! 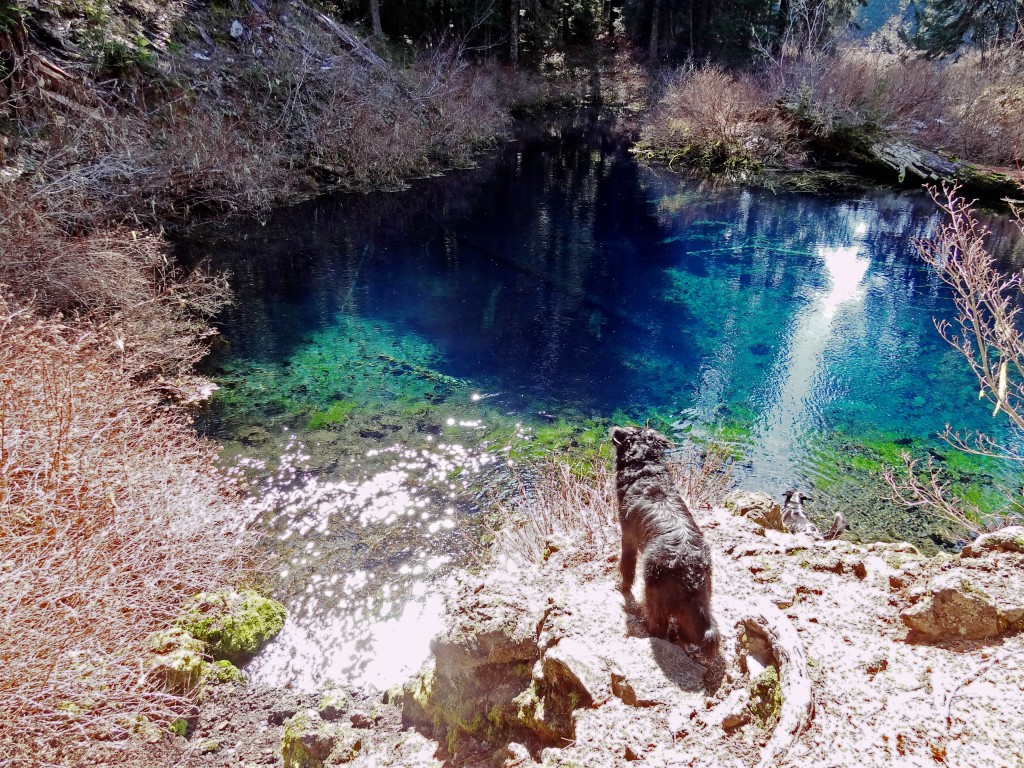 Pool where water pours through the lava rock at Clear Lake

For our return hike we followed the path back to Clear Lake, then took the other path that lads around the opposite side, goes around a cove and through the Clear Lake Resort. We were pretty hungry, so we stopped for a snack, almonds, Gin-Gins, dried apricots, carrots, and cherry tomatoes for us and carrots and cherry tomatoes for the pups. They’re suckers for veggies. We continued on the path until it met up with the path that brought us to Clear Lake. We continued back the way we came, across the highway, until we came to a bridge that crosses over the McKenzie River. At this point we were on the Waterfall Loop portion of the Mckenzie River Trail, from here we had the opportunity to see the waterfalls (Sahalie and Koosah) from a different angle. 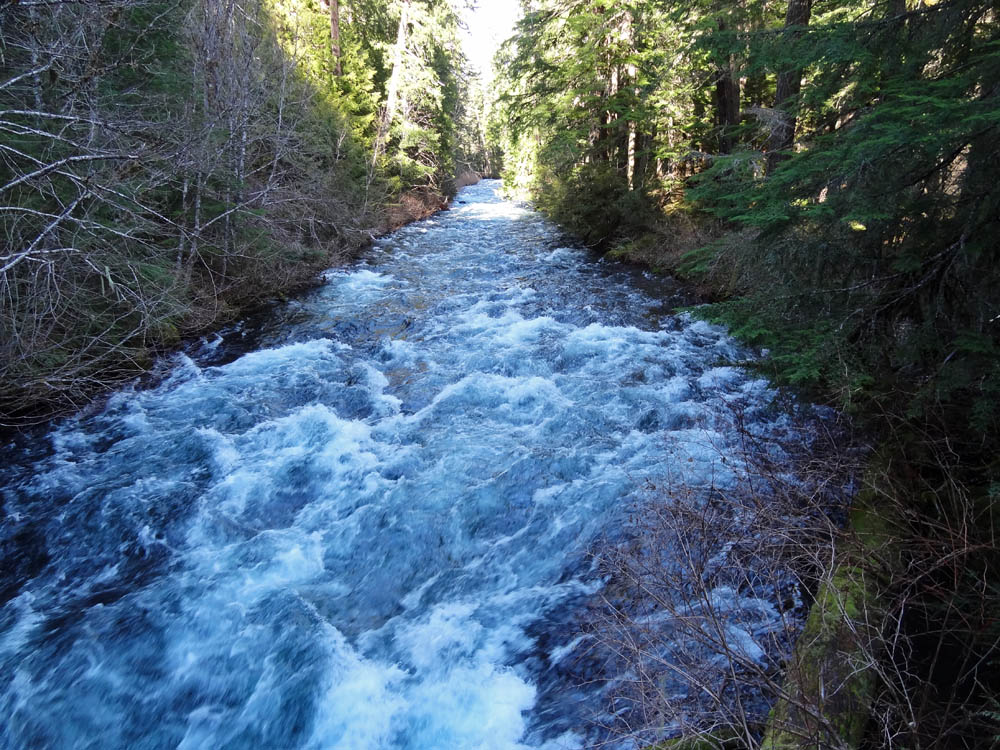 Crossing the bridge for the Mckenzie River Trail Waterfall Loop 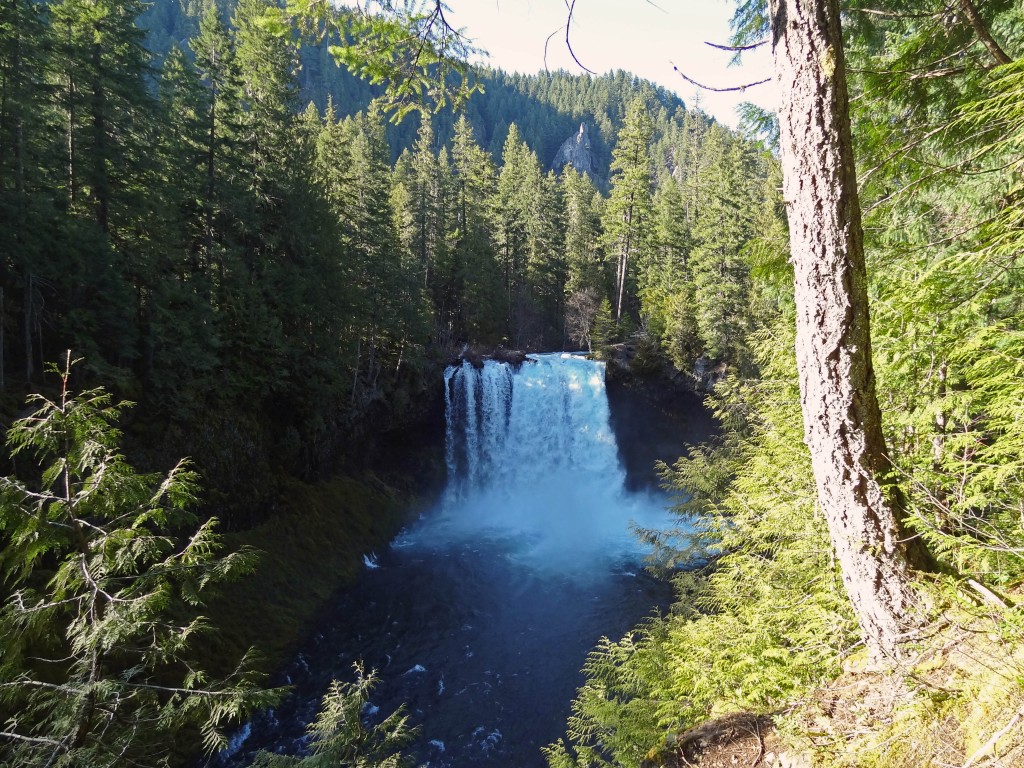 Koosah Falls, near the end of our hike.

Note: Portions of the trail are multi-use, which means mountain bikers will be on the trail too. This would be an epic day of mountain biking. There is a shuttle service here too, so you would just have to ride end-to-end. If you’re in the Bend area and don’t want to drive out to the trail, Cog Wild runs a shuttle a couple of days a week.