When Steve and I were in Hoi An, Vietnam we took an amazing cooking class and this was one of our favorite dishes. If you ever find yourself in Hoi An and have some dong to spare take a class with Gioan Cookery. We ate so much food we were nearly comatose by the end of our class…it was amazing!!! We unfortunately misplaced our recipe book, so this is our version of Vietnamese Sesame Beef…and it turned out delicious!!! 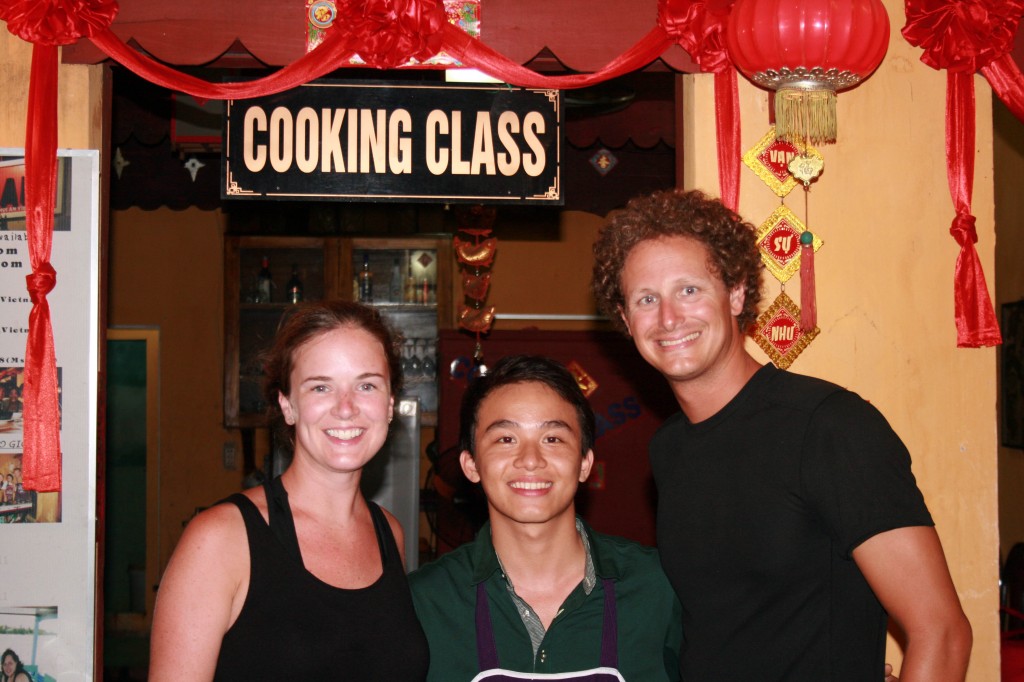 Steve and I with our cooking instructor.

2. Combine oyster sauce, rice wine vinegar, fish sauce, soy sauce, sesame oil, sugar and ginger in a large bowl. Add in the beef then the blended mixture, sesame seeds and half of the green onions.

3. Allow beef to marinate in the fridge for an hour minimum.

4. Grill in a grilling basket

(or cook in a skillet) over high heat for approximately 5 minutes per side.

5. Sprinkle the remaining green onion over the beef.

P.S. Sur la Table is having a spiffy sale on cookware and bakeware!!!

I just found this buried deep within the archives of my blog….forgotten, unpublished and without a pic, but I figured I’d just post it anyway, since we’re in Vietnam right now….and it’s kind of a westernized version of Vietnamese Pho.

This is one of our favorite recipes from Beverly Leblanc’s recipe book called Soups: 365 Delicious and Nutritious Recipes

. It’s fairly easy to make, pretty healthy, and hearty enough to call a meal. The only changes we make are substituting beef broth instead of beef stock, we add thai chilis to the simmer, and we add basil as one of the herbal garnishes. This time we forgot to throw the red peppers into the simmer, so we ended up adding them at the end…it was still good, but I’d definitely not forget them again.

1. Soak bean sprouts in cold water until ready to use.

2. In a large soup pot combine beef broth, thai chilis, star anise, cinnamon, cardamom seeds and fish sauce, cover and bring to a boil. Reduce heat and simmer for 10-15 minutes. Add bell peppers for the last few minutes until they have softened.

3. Pre-cook noodles according to package.

4. Remove spices from pot with chopsticks, slotted spoon, or other utensil.

We love our asian condiments, so we usually also serve it with sambal, siracha, spicy black bean sauce…you get the picture….anything spicy we have in the fridge will usually end up in the soup, but it’s also delicious when served a bit more mild.

cookbook. I don’t think it is being published anymore, but I’ve seen used copies for cheap on Amazon.